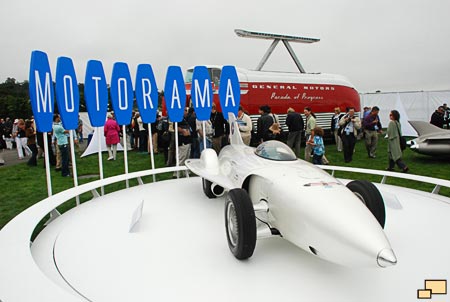 GM was a featured marque at the 2008 Pebble Beach Concours d'Elegance and they responded with a Motorama display that was both impressive and memorable. 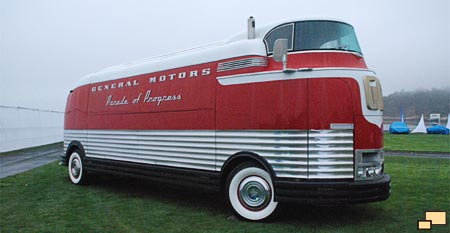 No doubt about it. The star of the show was the 1953 GM Futurliner. It was a crowd favorite just like in the 1950s when it toured throughout the United States, although it wowed them at Pebble Beach in 2008 for different reasons.
(more) 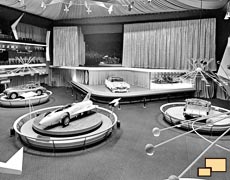 Motorama was a series of GM auto shows from 1949 to 1961. Their intent was to generate sales by way of displaying concept / prototype cars and various upscale or special models. The Motorama name first appeared in 1953 when the show traveled around the country. Besides the cars, dance shows with live orchestras and singers helped to draw in a crowd that totaled 1,400,000 in 1953, including the opening day in New York City which recorded 45,000 attendees.
Television was just starting out, so a free show such as the Motorama did not have a lot of competition. There was no Motorama in 1957 and 1958, although Cadillac did tour with some concept cars. In 1961, the final year of the Motorama, shows were held in New York, San Francisco and Los Angeles. A total 10,500,000 people attended the Motorama shows. 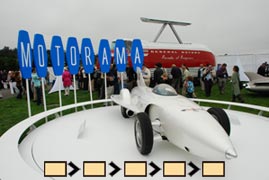 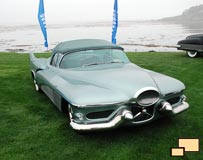 1951 GM LeSabre Developed at the same time as the Buick XP 300, the '51 LeSabre showed extensive aircraft influence in both its styling and engineering. Innovative features included fiberglass, aluminum and cast magnesium construction, a 12 volt electrical system, an automatic transmission with a torque converter and an oil cooler, fuel injection, built-in hydraulic jacks and a rain activated folding top. The brainchild of the legendary Harley Earl, the LeSabre was heavily inspired by aircraft technology and was the first to feature a wrap around windshield which would become a popular automotive styling element in the 1950s and 60s.
Below: The brake light, which not coincidently resembled the exhaust of a jet engine, could not be missed. Nobody ever accused it of being subtle! 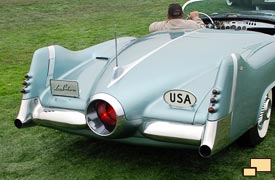 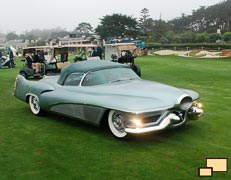 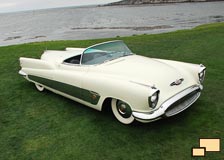 1951 Buick XP 300 Making appearances in the 1951 and 1953 Motorama, the Buick dream car was powered by a supercharged 215 cubic inch V8 rated at 335 horsepower. Charles Chayne, the GM head of engineering and the creative mastermind behind the XP300 once drove it to 140 mph, a significant rating for a road car at the time. Fuel was a combination of gasoline and methanol, and was intended as both a styling and engineering experiment. 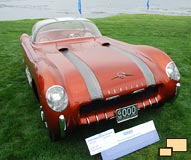 1954 Pontiac Bonneville Special Another Harley Earl creation, the '54 Pontiac Bonneville was inspired by the streamlined racers he found at the Bonneville Salt Flats. Power was supplied by a straight 8 engine fed by side-draft carburetors mated to a Hydra-Matic transmission. Only two were built and although at one time they were ordered to be destroyed by GM executives, better minds prevailed and both survived. This copper colored example is owned by Joseph Bortz. 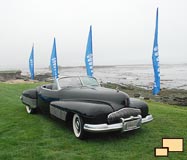 1938 Buick Y-Job The car that gave birth to the concept of the concept car, the Y-Job is one of the most famous cars of its era. Take a good look, remind yourself that it is a 1938 creation and it's hard to believe that at the time other cars had open fenders.
(more) 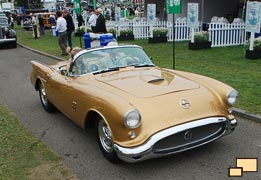 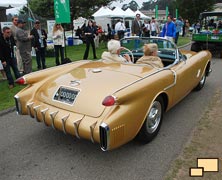 1954 Oldsmobile F-88 Roadster The Oldsmobile Corvette that never happened? Who knows, had it been available the Olds brand might still be in dealers showrooms today. This F-88 is currently owned by John Hendricks and is on display as part of the Hendricks Collection at the Gateway Colorado Auto Museum. Note the covered headlights. 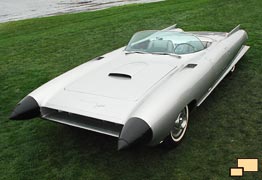 1959 Cadillac Cyclone XP-74 Harley Earl's last dream car, the Cadillac Cyclone reflected America's fascination with rocketry and space. As originally built the fins were more prominent but were revised after Mr. Earl's retirement. The engine was a 390 cubic inch V8 rated at 325 horsepower. The transmission was a three speed Hydra-Matic, which when coupled with the two speed differential, resulted in six forward speeds.
(more) 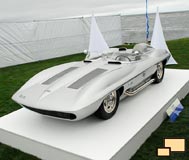 1959 Chevrolet Corvette Stingray Racer Bill Mitchell, who succeeded Harley Earl as the head of GM design, built (at his own personal expense) the 1959 Corvette Racer to determine the handling and performance potential of the Corvette. It was built in a secret area known as "Studio X" and served as a styling basis for the "Mid Years" 1963 to 1967 Corvettes. While various engines have powered the Stingray Racer, it is now equipped with a 327 cubic inch fuel injected unit.
(more) 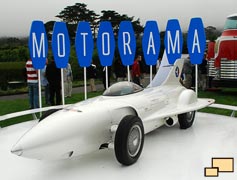 1954 Firebird I While rocketry and space technology was a common theme with the Motorama cars, the 1954 Firebird I took it to extremes. Designer Harley Earl freely admitted the Firebird I's rocket-like body was inspired by the Douglas Skyray delta wing fighter jet. The 270 horsepower jet turbine engine powered the rear wheels. 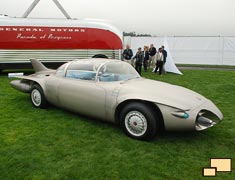 1956 Firebird II Firebird II was displayed on the opening day of the General Motors Technical Center in May 1956 and was the highlight of GM's 1956 Motorama. This space age design featured an exotic all-titanium body which required heat application of 920 degrees Fahrenheit to simply work with. Rather than welding and burnishing the metal, Harley Earl and GM Research Laboratories developed an epoxy resin that could bond titanium to body framing without weld marks. Beyond the surface area, the Firebird II featured a fully automated guidance system to navigate the "superhighways of tomorrow". 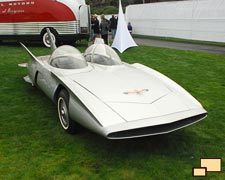 1958 Firebird III Harley Earl took his imagination to new places with his final dream car - the Firebird III. He was quoted as saying "I envisioned an entirely different type of car which a person may drive to launching site of a rocket to the moon". Under twin bubble tops, Mr. Earl placed the first single stick vehicle control system which eliminated the conventional steering wheel, brake pedal, and accelerator. Utilizing an ultrasonic key, the Firebird's large, butterfly doors opened via high frequency sound waves, which was similar to the way early television remote controls worked.
Futurliner
Corvette Sting Ray Racer
Buick Y-Job
1953 Corvette
Cadillac Cyclone
Note: Clicking on an image with this symbol (